Many thanks to our friend Alec Cooley at Busch Systems for this great article! For the complete article, please see visit the Busch Systems Blog

By my count, there are no fewer than 130 published academic papers that have studied some aspect of how to influence recycling behavior. This is a lot of effort to understand what seems like a simple, routine action: what causes a person to drop an empty bottle or sheet of paper through the opening of one bin versus another? We’ve learned a number of things over time. Recycling behavior is driven by layers of factors, including the situation a person experiences as they discard an item, and by the prior knowledge and expectations they bring to the moment. There’s a lot of nuance to prior conditioning, but I want to focus this blog on the in-the-moment situational factors. Convenience is obviously critical. Don’t get your hopes up expecting the average person to walk past a trash bin in search of a recycling bin. Another big one is the messaging and signage that goes on the bin itself. People have to know what items to put where. But what about a persuasive message? Does showing someone a message intended to motivate them to recycle at the instant they’re about to use a bin help nudge their hand in the right direction?

It was curiosity about this last point that led Busch Systems to partner with the University of Georgia (UGA)’s Office of Sustainability on a pilot project in the spring of 2019. The basic goal of the project was to test different messages placed with public area bins, to see if one had a greater impact over another to guide correct recycling. We tested three specific types of messaging:

To test their performance, three mid-size academic buildings were selected. The university has long used a standardized network of lightweight Busch System bins inside campus buildings. After conducting a waste audit of all the trash and recycling generated in the buildings over a 24-hour period, the network of centralized two-stream bins (landfill and mixed recycling) were retrofitted with special 8 ½” x 11” sign frames clipped to the back so that they projected above the bins. Each of the buildings was assigned to display one of the three sign messages across all bin stations. After a month, a second round of audits was done to track the composition of both streams. (A third round of audits to measure long-term impact was canceled due to COVID.) Which message appeared to have the greatest impact on recycling? None of them! The percentage of recyclables tossed in the trash went down in all three locations. While straight numbers suggested slightly better recycling for the informational and normative messages, the small sample size of the audits made it statistically impossible to say that one message influenced sorting more than another.

NEVER MIND THE MESSAGE, IS IT THE SIGN ITSELF?

After moving past the disappointment of this ambiguous result, it occurred to us there was a different takeaway, one we weren’t looking for. When we set aside the different messages and considered all the data points together, the overall outcome was fewer recyclables in the trash and less trash in the recycling bin. Looking at it this way raised an interesting question. Does simply having prominent recycling signage influence how people sort waste? Without consciously intending to, we’d tested not only specific messages, but the impact of adding the above-bin, 8 ½” x 11” sign frame itself. And while the same the statistical limitations apply, the pilot results were enough to make this worth exploring.

One of the things I love about my job is the flexibility it allows to dive down rabbit holes pursuing a question like this. Delving into that list of 130+ studies, I came across three that asked this basic question. Here’s what they found: 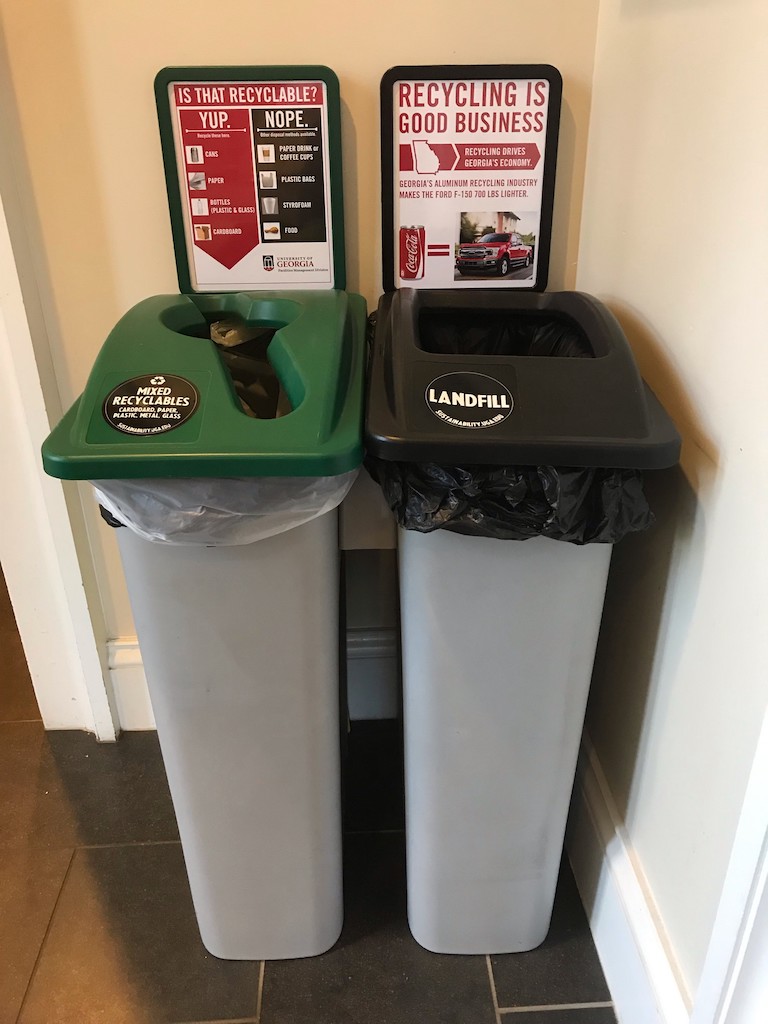 THE ROLE OF VISUAL PROMPTS

So what’s going on? Bins generally come with a label on the lid or the side, so why should placing an additional sign above the bin matter? Earlier I referred to convenience and messaging as two factors that influence sorting decisions in the moment. The Austin and Werner papers both refer to a third crucial factor: visual prompts.

Let’s step back a minute to consider the basic dynamic involved when people are discarding an empty can or other item. It’s an essential truth that people, by definition, don’t value something they’re throwing away. Things we don’t value don’t command our attention beyond what’s absolutely necessary. That means there’s a high likelihood the person carrying soiled paper plates away from a picnic area, or the office worker late to a meeting, is only giving fleeting attention to the waste and recycling bins they’re approaching. A bin label that says “Cans & Bottles” or “Trash” will, in theory, guide them to use the correct bin, but not if they don’t notice it because they’re wondering where they can find a restroom to wash their hands or mentally preparing for that meeting. In that situation, where people are mentally functioning on auto-pilot, bins have to have a way to communicate the essential information – this bin is for recycling, that one is for trash – to the unconscious part of their brain directing the motion toward the bins.

That’s what visual prompts do. They function as a form of non-verbal communication, engaging people at a basic level on how to respond in a rudimentary way to a situation. Those versed in recycling best practices know that using different colors to distinguish bins serves this purpose. Research suggests that restrictive openings can also have a prompting effect, as people are conditioned to associate a round hole or slot opening with recycling cans or paper. A basic label on the lid of a bin can also have a prompting effect. But as with any form of visual prompt, it only works if they’re noticed. And that gets to an important point. While different situations will generate varied responses, as a general rule, the more the visual prompts pop out and grab your attention, the more likely they are to achieve the intended outcome. Labels with two or three-inch tall lettering, placed on the side or even the top of a three-foot tall bin are less likely to get noticed by a distracted person than an 8 ½” x 11” color-coded sign placed above the bin at eye level. By the same token, using colored lids or collars to distinguish otherwise uniformly colored bins may work, but probably not as well as applying separate colors to the entire bin.

If you accept my reading of the studies, we’ve established that prominent signage can influence recycling behavior in two distinct ways, through its mere presence as a visual prompt, as well as the message it displays. The ambiguous results of the UGA project leave unanswered what type of message is most likely to impact sorting behavior. Messaging, however, is entirely separate universe of complexities with a myriad of sub-topics warranting their own blogs.

What I would offer in closing is that any type of message displayed on or around waste bins is ultimately subject to a dynamic as powerful and immutable as the gravitational force that keeps planets circling around the sun. The fleeting attention span people have when interacting with bins severely restricts the amount of information most will absorb. Like explaining where the attractive shirt you’re wearing to the person you’ve just met on an elevator, you’ve got to make it quick, because they’re cutting you off as soon as the door opens at their floor. Other studies may parse the value of one persuasive message versus another, but there’s a hard-to-avoid opportunity cost to presenting any of these in the immediate vicinity around bins. Rather than risk overloading people with more information than they can absorb, the pro tip is to focus on the essential information they need in that moment, which is to understand 1) there are different bins or openings for different streams, 2) what those streams are (e.g. mixed recyclables, trash, compost, etc.), and 3) the critical, most common items that are accepted. There are exceptions to every rule, and I’m sure some who would debate this point. But for the most part, my advice is to save persuasive messaging for a different situation where you can engage people in a more meaningful way and without distracting them from the essential act of sorting their waste.

Interested to dive further into recycling behavior? Find additional blogs written by Alec Cooley on this and other topics in Busch Systems Advancing Recycling blog series.
Previous Post
Next Post