Recently, representatives from the Stowe Mountain Resort in Stowe, Vermont, contacted Recycle Away in hopes that they could partner together, to incorporate a newly designed multi-waste stream recycling program into their business. Stowe currently had a recycling program already in existence, however, they were having major issues with their waste streams being cross-contaminated.

After some back and forth discussions about the goals and objectives that Stowe wanted to achieve, it was clear that they were ready to make the change to a more streamlined and effective recycling program. They specified that they wanted containers that were very rugged, professional in style and design, and could be easily moved around multipurpose spaces. They also requested that they be customizable in order to match their specific specs (they had sketched up some drawings of what they had in mind). Overall, they were looking for something that would make waste sorting easy for their guests.

There were many conversations back and forth between Recycle Away, Stowe and the manufactures in order to get all the customizations acceptable, in terms of implementation and fitting their budget. Several revisions were made to the drawings and changes of specs during this process. They decided to use our custom graphics logo option for their containers and went with a plain black container with the Stowe branded logo in their red and white colors.

The containers that Stowe decided to go with were being manufactured from scratch and the lead time to create these containers was going to take a few months. We had never actually designed a container like the ones they specified, as these custom containers have multiple compartments, special shelving, and funneled sections. After all the modifications, the containers arrived in two parts for easy mobility and were eventually constructed into place by the Stowe staff.

Stowe received a total of ten stations, each station consisting of two conjoining parts with spaces for waste, recycling, compost, liquids and dishes/trays. These containers went to every one of their buildings that has a dining or multipurpose area- one of them was even dragged up to the summit lodge on the back of a snow cat! Stowe recently called our offices to let us know that all the units were in place and that they were pleased with the outcome. They now have a more Zero Waste streamlined program to offer their guests and staff.

It was a pleasure to work with everyone from Stowe Mountain Resort who was involved in this project. We love partnering with local businesses and look forward to more projects like this. Check out their Custom Multi-stream Recycling Station below! 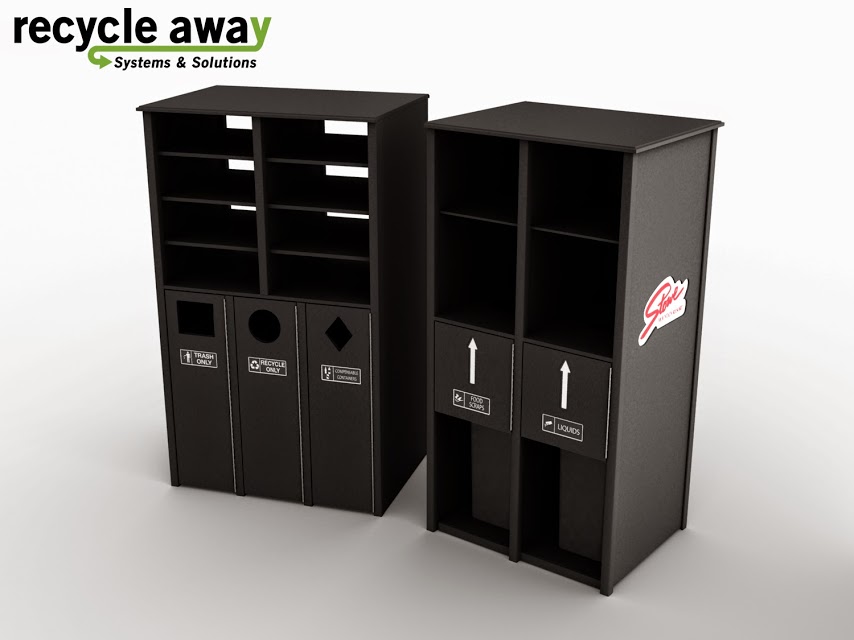