Your Water Bottle Can Ride Forever on the MBTA 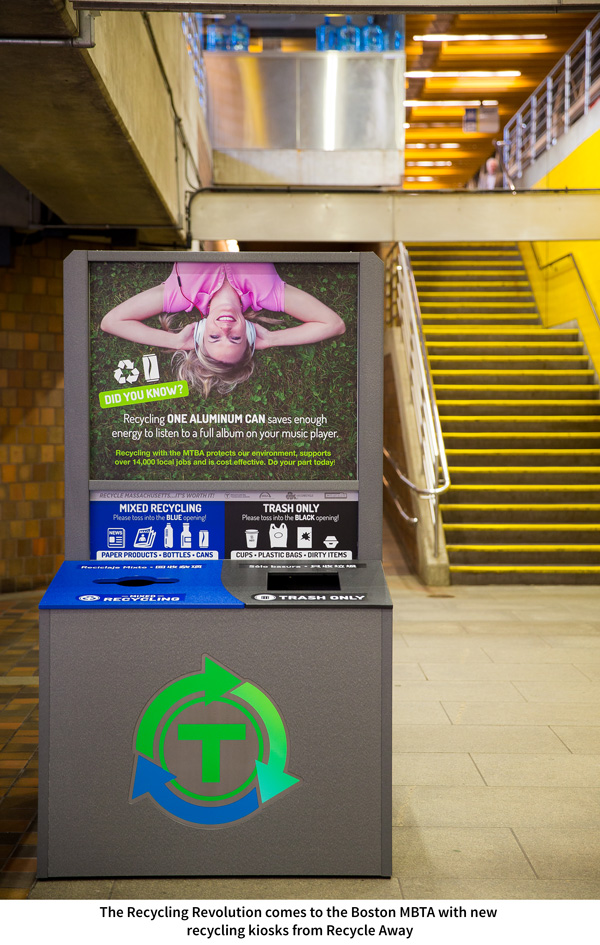 Bostonians know they can 'ride forever 'neath the streets of Boston' on the MBTA using their Charlie Cards. 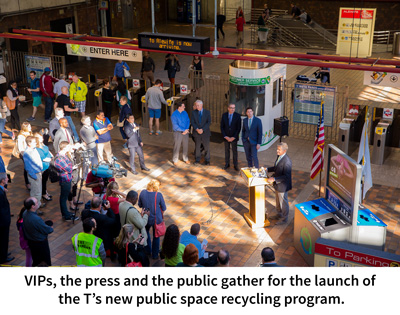 Now the MBTA is making it possible for patrons' water bottles, cans, and paper refuse to ride forever too, with a new recycling pilot program. How about tossing your plastic bottle into a recycling bin that itself is made of 97% recycled plastics that have been ground, cleaned, flaked, colored, treated to resist UV light, and extruded to build a handsome, durable recycling bin. So patrons' bottles may turn into bins in their own right, to catch bottles at another T station.
The pilot-project, which launched September 23, 2015, is the brainchild of the nonprofit MassRecycle, working with the MBTA, the Massachusetts Beverage Association, and Casella Recycling. Together these groups dreamed up a recycling kiosk that would help fund itself through advertising revenue.
The first sample kiosk they saw was poorly made and flimsy, so they turned to RecycleAway , who worked with a Wisconsin-based company that focuses on turning plastic into "furnishings that 'close the loop' on unneeded waste." 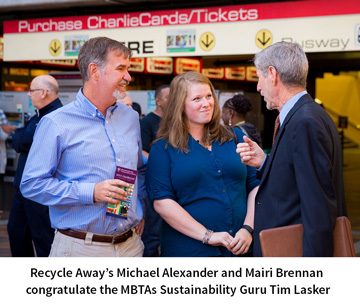 Together they designed an attractive kiosk that incorporates two recycling bins back to back, supporting a seven foot signboard.
The bins are double-units, with the blue side for mixed recycling, cans, bottles, paper and the black side for trash. Signage on the lower third of the signboard gives directions to patrons. The upper two-thirds forms ad space, which will be rented on a monthly basis. A portion of the spots will be reserved for a recycling call to action.
And speaking of a call to action, the kiosks are featured in an ad playing at Fenway Park, and later on cable channels.
The first two units were deployed at the MBTA's busy Alewife station on September 23. Casella Recycling will service them and offer design, marketing, and consulting services. 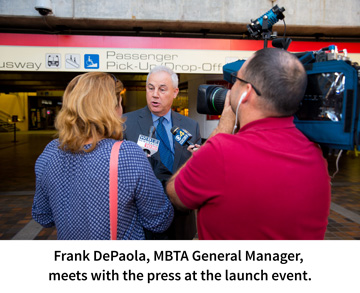 What's cool about this?
A lot.
It's new. Public recycling just hasn't been done like this before. The public sector has a hard time coming up with money to support recycling programs. Selling ad-space in high-traffic T stations can create a revenue stream to purchase more recycling containers. (And hey, there's a sale right now! Contact MassRecycle to rent this ad space at a reduced price.)
It's American made. 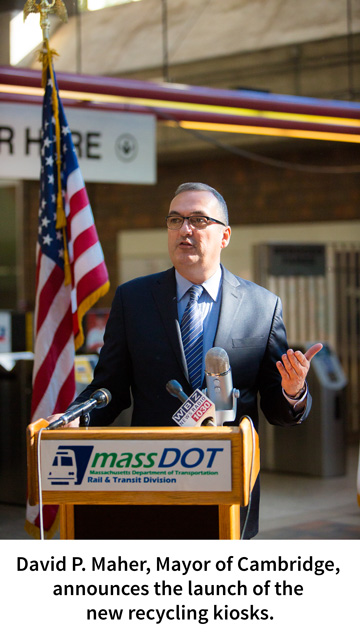 It provides a consistent, convenient, color-coded way for patrons to use public recycling. This is important for Massachusetts, which is running out of landfill space. By 2020 Massachusetts will need to export over 2 million tons of trash anually. Recycling creates 10 times more jobs than disposal, with 20,000 Massachusetts businesses and 14,000 jobs driven by recycling.
It's scalable. Ultimately MassRecycle hopes to place recycling kiosks throughout the MBTA system, possibly color-coded to the different lines; red for the Red Line, blue for the Blue Line, etc. The sale of the ad space will fund the additional kiosks, and the Alewife experience will guide future design tweaks.
It's a model other cities can follow.
The handsome, customizable containers, the same used at Yankee Stadium, linked to an advertising kiosk, can provide a modular way to fund and build out a public recycling system. This will become more important as space in landfills dwindles. 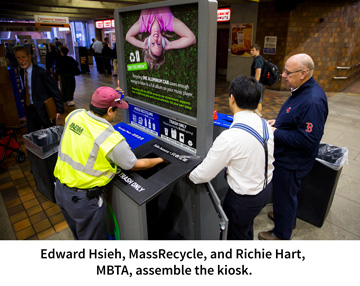 So yeah, it's cool. Throw your water bottle into the Alewife kiosk you saw on the screen at Fenway, and wave at the recycling kiosk that pops up in another T station in a few months. Who knows, your bottle may ride forever 'neath the streets of Boston. Et tu, Charlie?
Jessie Haas is a Vermont native, journalist and writer of award-winning children's books about horses and the people that love them. www.JessieHaas.com
Jason Kan is a Boston-based photographer who rides the T on a daily basis. Check out his work at www.KanPhotography.com