A Recycling Law That Feeds People? How Does That Work?

Posted by Jessie Haas on 9/1/2015 to Press Releases
Share |
Actually, it shouldn't be surprising, especially if you read Act 148, the universal recycling law passed unanimously the state of Vermont in 2012.
How It Works
Act 148 ratchets up a requirement for generators of food "waste" to start composting, starting in 2014 with institutions that generate 104 tons a year.

On July 1 of this year, folks who generate more than a ton of food waste per week-grocery stores, restaurants, cafeterias-hit the requirement to take that waste to a composting facility.
The magic happened immediately. "Food waste" turned back into food, and the Vermont Foodbank saw a a 24 percent surge in food donations over July of last year. Alex Boornstein, the Foodbank's chief operating officer, predicts a 60 percent increase in food donations in 2016, mostly due to Act 148.
Vermont Food Recovery Hierarchy
This is no accident. The Vermont legislature wrote a best-use hierarchy into the law, and the state Agency of Natural Resources has been actively educating stores and restaurants on the guidelines.

Big Stores React
Composting and food donation are not new. Of 17 Hannaford Supermarkets in Vermont, 5 or 6 have been composting for a decade. Additionally, almost all Hannaford stores work with local food rescue groups, and contributes to community food drives.
But on July 1, as restrictions on dumping tightened, even this good citizen found it could do more. Other stores, like Price Chopper, have also reached out to food rescue organizations. It's suddenly not just a feel-good thing to do. It's very much in the stores' financial interest, and they have responded accordingly.
The Free Food Economy
The need is there. Food banks and food pantry's continue to see escalating numbers of customers. Prior to Act 148 coming on-line, they were seeing a drop in food donations from stores and warehouses, which had begun selling more short-dated food to discount food stores. (This also stretches the food dollar for families on tight budgets, and keeps food from being wasted.) 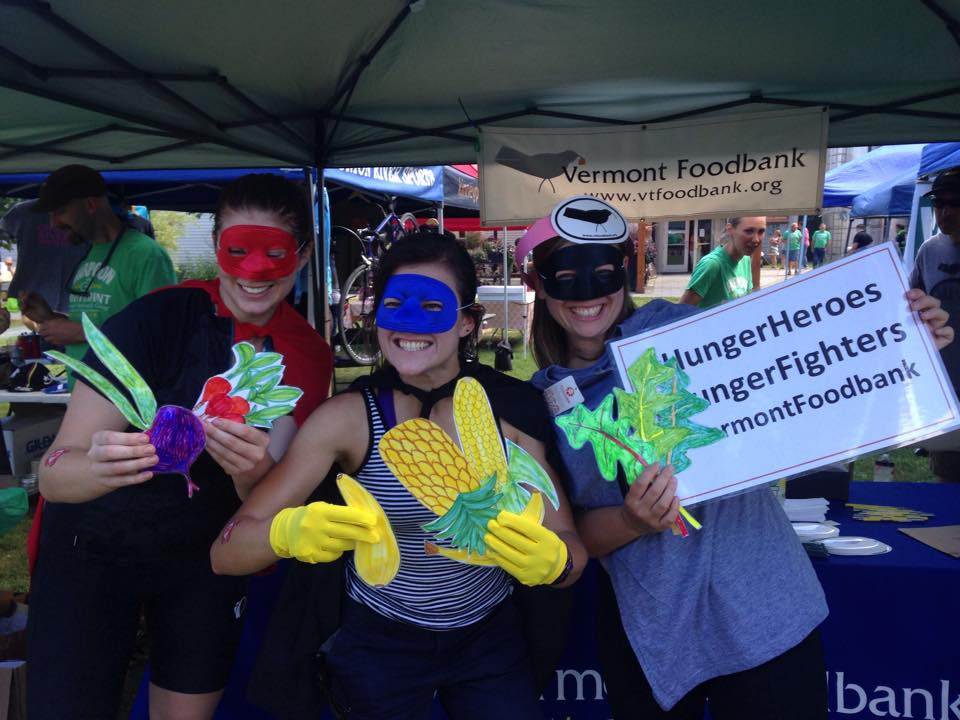 The Vermont Foodbank projects an increase of 1.5 million pounds of donated food under the new recycling law, but that's still not enough to meet the demand. The shameful truth is that many full-time jobs don't pay enough to secure housing and heat, and transportation, and health care, and food. Other necessities come with an inflexible payment schedule. Food starts to seem optional – and how crazy is that?
A Moment of Truth
One thing is obvious: We have enough food in this society for everyone. It's just that a bunch of people can't afford to buy it.
So we throw it away?
Not anymore. Not in Vermont.
The consequence is that not only do we reduce methane production from landfills, but we share the loaves and fishes. We create a few jobs, picking up, delivering, processing the recovered food. We fill some bellies. We relax some anxious parents. We start knitting society back together at one of the broken places.
One quibble with the Vermont Food Recovery Hierarchy: source reduction implies that we have an actual surplus, more food than we need. But we can't say that we're overproducing food until everyone has eaten well, and pushed back from the table. Then, if there's still good food left and no-one to give it to, we can start to dial back.
Jessie Haas is a Vermont native, journalist and writer of award-winning children's books about horses and the people that love them. www.JessieHaas.com
Related content from NPR: It's Time To Get Serious About Reducing Food Waste, Feds Say