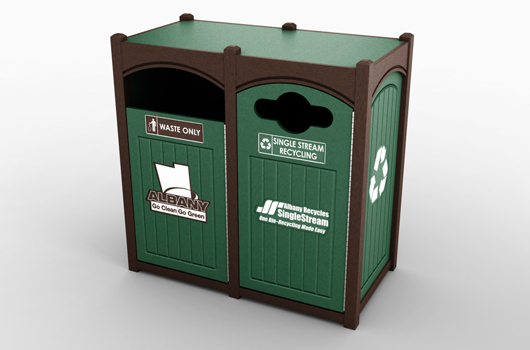 The City of Albany, New York, worked closely with Recycle Away to design custom recycling stations suitable for recycling in public spaces in some the city's most visited areas, including the sprawling Washington Park with its annual Tulip Festival, many pedestrian paths and historic monuments. The city Recycling and Public Works staff were seeking a recycling station that was durable enough to be placed year-round in an outdoor environment yet also be attractive. The City of Albany recently adopted a single-stream recycling program, and wanted the new recycling container to feature the city's new single-stream recycling logo. In close collaboration with city staff, Recycle Away designed a two-stream recycling container from our Sustainability Series, encompassing an attractive color combination that was also clearly marked for both recycling and waste. As an added benefit, the entire recycling station is manufactured from high-grade plastic lumber manufactured from recycled milk jugs.