Posted by Ruthie on 8/6/2014 to Custom Recycling Containers
Share |
Lets talk about branding. Better yet, lets talk about one of the most recognizable brands in the world. Certainly in the sports world. If you haven’t guessed by now, I’m talking about the New York Yankees, one of the most successful and storied sports franchises in all of history. As any good marketing executive would advise, once you’ve created iconography synonymous with your brand - don't mess with it. The current interlocked N Y of the New York Yankees has stayed essentially the same since 1912. “The design was actually created in 1877 by Louis B. Tiffany for a medal to be given by the New York City Police Department to Officer John McDowell, the first NYC policeman shot in the line of duty”.1 New York Yankees Website  As is true for whatever Tiffany & Co. has graced with its magical touch, the Yankee logo has only increased in value over time.
One can only imagine the infrastructure in place among a multi-billion dollars’ organization to ensure the integrity of its brand. In short, companies spend millions of dollars a year on top designers, marketing executives and marketing materials which must maintain these brand design standards. 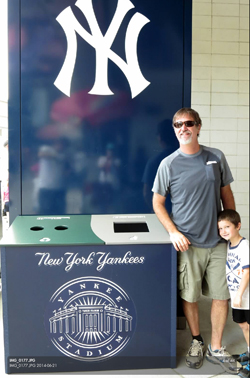 A professional sports stadium incorporates brand iconography throughout the facility, a facility which on any given night may have 50,000 pairs of eyes roaming through its hallways. And while certain more permanent fixtures are likely developed and implemented internally by the stadium owners own organization, much of the branded assets are supplied by third party vendors. A good example of this are the garbage and recycling containers that permeate the building. A world class organization such as the Yankees will only employ the best who know how to support the brand with the most professional services. RecycleAway LLC,  has done it before and is now doing it again. This time for one of the most recognizable brands of all time! Recycle Away is more than an expert in the world of cutting edge recycling systems. Recycle Away is a top-notch graphics company working with some of the largest facilities in the country to guarantee the integrity of their brand and messaging. With Recycle Away, the New York Yankees has partnered their recycling initiative with the very best in their field!  We're a proud team.